It is never recommended to drive beyond the speed limit. When it comes to traffic, safety is the most important thing for both you and other drivers.

However, it can often happen that speed limit signs are poorly positioned and not visible. So you might drive faster than you should, without even knowing it.

If you don’t own a radar detector, you might even get a ticket, and all because you were in a new city and didn’t see the sign that all the locals know is there.

So what is the solution? A portable radar laser detector, of course! We love this offering by K40 RLS2. Let’s see what it has to offer. 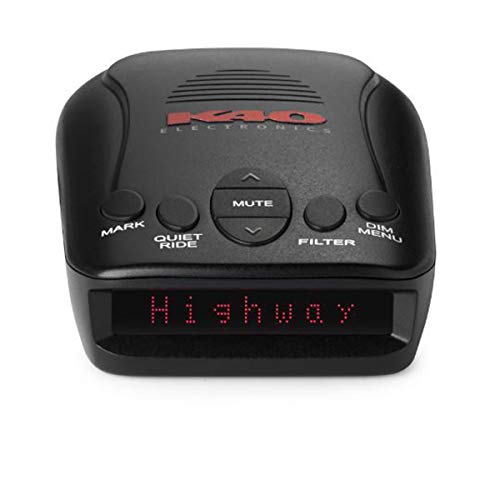 Since the first radar detectors have been commercially available back in the 1960s, they are not something new on the market. However, they have been upgraded and improved over time, and K40 RLS2 is currently one of the best for the price versus quality it provides.

It detects emitting technologies that police use, such as radars and laser guns. It will warn you on time, so you will lower the speed and avoid getting a ticket.

Who is this product for?

This product is mainly for people who travel a lot. When you are in another city or town for the first time, it might happen that you don’t notice the speed limit sign, which can lead to getting a ticket. The device is pretty simple to install and can be used in cars, motorcycles, trucks, buses, or any other vehicle.

However, if you are driving mostly in your city or town, you might not need a radar detector. It’s a bit of a costly device, and there is no reason to buy it unless you need it.

The package includes the actual device and a user manual on installing it in a vehicle and how to use it. Although it’s pretty simple to install and use, you should carefully follow the instructions if you haven’t used a radar detector before.

Also, this portable radar comes with a 12-volt power cord, a suction cup mounting bracket, and a travel case. With 1 pound (0.45 kg) in weight, it’s a pretty light device.

Unlike plenty of similar devices, this radar detector is equipped with both radar and laser detectors. Besides, it also has a CD receiver featuring Bluetooth, USB port, iHeartRadio, Spotify, Pandora, and JVC remote app compatibility.

However, it doesn’t offer national coverage. It’s a nice feature supported by some radar detectors, which increases the range of radar detection. It might be useful for people who drive pretty fast, for example, motorcycle drivers. If that’s not the case with you, the detection range of this device is more than enough to be safe.

How to install and use it?

Installing (mounting) this device is pretty simple, although you should still read the manual first. Using the suction cup mounting bracket that comes in the package, mount the device on the windshield to obstruct your vision while driving. The best place to mount it would probably be a lower part of the windshield. Once you fit it, insert the power cable into a cigarette lighter or another power-source outlet.

Once you have it done, check the user manual on how to use it. It’s pretty simple since it will only have a few buttons. There is a big mute button and volume up and down buttons near it. You will also notice a button for the “quiet ride” function. It is similar to the mute feature, but it will still alert you quietly and turn off any sounds just after the alert. Usually, it will alert you if you go around 5 mph beyond the speed limit.

A great alternative to this radar detector is the Escort Redline 360c. Although it’s more expensive than the K40 RLS2 Radar Detector, it offers many more great features. Not only is it compatible with Windows 7, 8, and 10, but it also has an intelligent false alert filter with AutoLearn technology. It features an extreme long and wide range, and has Stealth technology so police officers won’t be able to detect the detector. It offers national coverage and crystal clear voice alerts. Finally, it has a sexy, futuristic design and will look cool in any car.

We hope that our K40 RLS2 Radar Detector review has helped you make your purchasing decision simpler. The K40 RLS2 is a pretty useful device. Although a bit pricey, it will pay off after the first time you avoid getting a ticket. It’s straightforward to install and use and is definitely worth the money if you drive a lot. However, if you’re ready to put a little more cash in, you should aim for Escort Redline 360c Radar Detector.

Although it costs a bit more than the K40, it has some great features, and since it’s a one-time investment, it can be a great choice.

How To Mount Radar Detector on Motorcycle?

Beltronics vs. Escort Radar Detectors: Which Brand is Better?