Sometimes even the most careful drivers will exceed the speed limit. To avoid being ticketed, drivers – particularly those who use highways and interstates regularly – rely on radar detectors like the Escort iX to alert them about potential troubles. This gives them enough time to adjust their speed.

Escort is one of the top manufacturers of such products. Its radar detectors come equipped with mechanisms that allow them to detect even the most sophisticated threats. Escort radar detectors help the drivers avoid the hassle of getting a speeding ticket.

The Escort iX Long Range Radar Laser Detector is among the brand’s most popular models to date. It is a long-range radar detector with several built-in laser sensors to identify some of the more advanced speed monitors. It returns better, more precise results than older models.

In this article, we’ll take a closer look at the Escort iX. We will highlight its qualities, point out its shortcomings, and compare it against similarly priced and popular models from other manufacturers.

The Escort iX operates on all four radar bands in use today: X-band, K-band, Ka-band, and the Pop mode. It sends you early warnings of all detected speed monitoring devices within a large radius around the vehicle and has swift response times. This model is also equipped with multiple laser sensors, which helps it detect red-light cameras used to take photos of speeding vehicles.

This model is noticeably smaller than the company’s earlier radar detectors and mounts very easily onto your car’s windshield. You can choose to have alerts displayed in one of four different colors: red, blue, green, and amber.

This lets you maximize the visibility of notifications on the device’s OLED display, which is particularly useful if you’re directly exposed to sunlight while driving. You can also pick the color that matches the other displays on your dashboard so that the detector doesn’t stand out in any way.

The Escort iX uses the proprietary TSR technology that analyzes the results and eliminates false threats from the X-band and K-band sources. For example, K-band signals are used in the United States to power up systems that measure traffic flow on certain roads.

Most radar detectors will pick up these signals and consider their threats, resulting in excessive alerts. Thanks to the TSR technology, the Escort iX eliminates all these false threats based on the information gathered from GPS satellites.

Connecting the device to your smartphone is made easy by the built-in Bluetooth functionality and the Escort Live app. Once your radar detector is synced with your phone, you will also receive crowd-sourced alerts for optimum ticketing protection. If you detect a threat while on the road, you can feed it into the system, thus helping build a more relevant database.

Firmware updates can be downloaded for free from the manufacturer’s website, whereas major database updates are released to subscribers only.

The Escort iX is an excellent wide-range radar detector with more precise and reliable results than those provided by similar models from other manufacturers. Because it uses TSR technology in combination with GPS satellite signals, it is extremely efficient in eliminating excessive false alerts. In fact, this is still the cheapest model out there with built-in GPS support.

With the Escort iX, you’ll get a wide range of results across all four radar bands currently in use. Another great thing about it is the addition of crowd-sourced data, which allows users to identify real-time threats on the road and alert other fellow drivers about them.

There are other radar detectors out there that offer similar features and are available at approximately the same or even lower prices. For comparison purposes, let’s look at the two models in the same class as the Escort iX – the Beltronics RX65 Professional Series and the Cobra ESD7570.

All three are fairly small and easy to mount onto the windshield of your car. They are equipped to receive signals across all the different radar bands and give somewhat precise results. Like the Escort iX, the Cobra ESD7570 also has a sophisticated detection mechanism that eliminates false threats. The Beltronics RX65 doesn’t have it, so it will likely generate more alarms.

One more area that the Beltronics RX65 doesn’t live up to its competitors is the ability to detect laser cameras. While all three are immune to VG-2 detection, only the Cobra ESD7570 is undetectable by Spectre technology. But neither of these two models has support for GPS satellite signals and Bluetooth function, nor the option to adjust the display colors. Only Escort iX offers these options.

Although the Cobra ESD7570 is immune to the Spectre traffic monitoring system, the Escort iX comes out of this comparison as the clear winner. It delivers the best, most trustworthy results thanks to its ability to gather the information from GPS satellites, something that the other two can’t do. The Bluetooth functionality, which is again unique to this model, allows you to receive real-time alerts based on the feedback submitted by other users.

Finally, the Escort iX allows you to adjust the color of the alerts on display to make it more easily legible.

The Escort iX is the one radar detector that delivers on all three fronts when it comes to performance, convenience, and reliability. 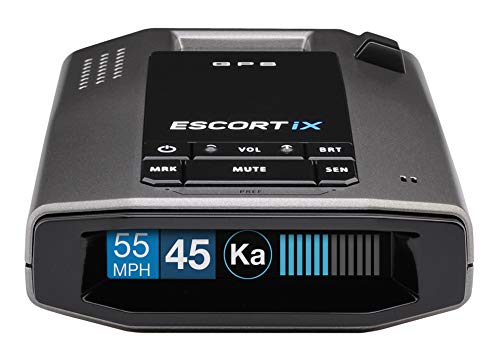 What Does Ka Mean on a Radar Detector?