More and more drivers today are relying on radar detectors to send them timely warnings about traffic monitoring devices along their route. These detectors are able to receive long-range signals and alert drivers immediately, giving them more than enough time to adjust their speed and avoid getting a ticket.

There are many affordable consumer-friendly radar detectors out there, providing useful features drivers can benefit from greatly while on the road. It’s not enough for the detector to just be able to send alerts about radars and traffic cameras.

Recent models are equipped to detect more sophisticated monitoring devices like the red laser-based cameras used in some states. Some of them even have a built-in mechanism that recognizes false threats based on the signals received from a network of GPS satellites.

Syncing the device to your computer or your smartphone is easier than ever, too. Most manufacturers have released proprietary apps that allow you to plan your route in advance.

Users are also given access to framework and database updates; some of them are free, while some are only available to subscribers. In addition to this, some companies have crowd-sourced their data to provide real-time alerts based on the feedback submitted by their users.

With so many different models available right now, finding the best car radar detector can be difficult. To help you make an informed choice, we’ll take a closer look at three of the most popular models on the market.

The Escort Max 360 Radar Detector utilizes two antennas – one in the front and another one in the back. This allows for 360-degree detection, which is something most other models on the market can’t compete with.

The main OLED display warns you about the monitoring devices ahead of you, while the four arrow-shaped LED lights on the side of the detector show you the direction from which the signal is coming. The device is GPS-ready and works on all four radar bands that are in use today.

You can choose between five different levels of filtering and select how much information you want the detector to show you. If you go for the Expert mode, you’ll receive warnings of up to four incoming threats at the same time.

In addition to the multicolor display, you can also opt to receive voice alerts. Free framework updates are available on Escort’s website, but you will have to subscribe in order to receive database updates.

You will also receive crowd-sourced real-time alerts once you connect the device to your phone. This is made possible thanks to the free EscortLive app.

When the two devices are synced, the app also shows real-time speed limit information as well as your driving speed at any given time.

The Whistler Pro-78SE High-Performance Radar Detector is by far one of the most affordable models out there. This means that the manufacturers had to cut costs wherever they could.

For starters, the OLED display is the old dot-matrix OLED display that shows alerts in blue letters. On the bright side, you are given the option to adjust the screen’s brightness and turn on the voice alerts.

While it operates on all four radar bands, this detector isn’t GPS-ready, which could potentially result in false alerts. To minimize their frequency, you can turn on the City mode.

The device will then filter out the signal interference caused by burglar alarms and automatic door openers. There’s no option to sync this detector to your phone, either. Instead of that, you get the INTELLICORD cable that allows you to remote control the main features of the device. 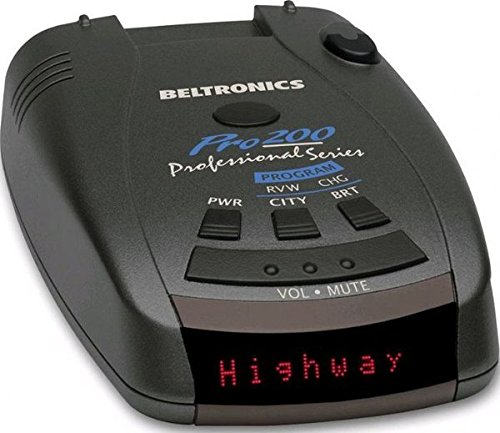 The Beltronics Pro 200 Radar/Laser Detector is another model that doesn’t have built-in support for GPS signals. Luckily, false alerts are eliminated thanks to the use of traffic sensor rejection (TSR) technology.

This model is highly responsive: it takes only 500 milliseconds to warn you about a detected threat. It works on all four radar bands and has laser sensors for more accurate results.

The blue OLED display also shows a progress bar that goes up as you’re approaching the radar. You can maximize display visibility by adjusting the brightness to fit the lighting conditions.

Furthermore, if you find the voice alerts to be too loud, you can lower the volume instead of turning them off completely.

All three radar detectors highlighted here have their fair share of qualities and shortcomings. Although they still remain very popular, which may have something to do with how affordable they are, the Whistler Pro-78SE and the Beltronics Pro 200 are largely outdated by today’s standards.

Still, they are excellent for beginners and those unwilling to invest in pricier models.

The Escort Max 360 offers several advanced features that the other two radar detectors simply cannot match. It provides real-time alerts for up to four radars at the same time and shows you the direction from which the signal is coming.

What’s more, the addition of the rear antenna results in an extremely wide detection range, making this the best car radar detector out there.

What is a Radar Detector?

How to Conduct a Radar Detector Test